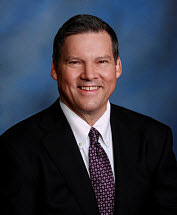 Tommy L. Yeates graduated with highest honors from Southwest Texas State University in 1981. Upon graduation, he attended Texas Tech University School of Law where he graduated in 1984.

Following his graduation from law school, Tommy joined Moore Landrey, L.L.P.  He has been with the same law firm ever since.

Tommy is Board Certified by the Texas Board of Legal Specialization in the areas of Personal Injury Trial Law and Civil Trial Law.  He has been named as a Texas Super Lawyer in personal injury law and is AV+ rated by Martindale-Hubbell. In the 2021 Judicial Edition of Martindale-Hubbell, Tommy received the highest possible rating in both legal ability and ethical standards, reflecting the confidential opinions of the bar and judiciary.

“For over 36 years, it has been my honor and privilege to represent working people and their families.  I do not represent insurance companies.  I have the experience, financial resources, and most importantly, the passion, to fight for you.  Please call me for a free consultation.”

Cause No. A-187,120; Maria Granja, et al v. Best Transportation Services, et al; In the 58th District Court of Jefferson County, Texas.  Mr. Yeates served as co-counsel in an 18-wheeler death action and multiple injury action which resulted in of the largest verdicts in 2011 as reported by Verdict Search.

Cause No. 11,842; Fredricka Ann Mason, As Next Friend of Jalyn Nicole Coxen, A Minor vs. Dawn McKillip Odom, et al; In the 273rd Judicial District Court of Sabine County, Texas.  Mr. Yeates was lead counsel on a case involving a small child who was severely injured in an accident involving a logging truck.  The jury verdict was reported to be the largest personal injury verdict ever reported in Sabine County, Texas.

Civil Action No.:  1:11-CV-300-RC; Phillip A. Davis vs. Signal International Texas GP, LLC, et al; In the United States District Court for the Eastern District of Texas.  Mr. Yeates was named as co-counsel in an employment case that was certified as a class action in federal court, Eastern District of Texas.  Plaintiffs brought an action against Signal for Signal’s failure to provide proper notification of a mass layoff pursuant to the provisions of WARN Act.  A judgment was entered in favor of all laid off employees.  This case was affirmed by the Fifth Circuit Court of Appeals in Case No. 12-41262; Phillip A. Davis, et al v. Signal International Texas GP, LLC, et al.

Cause No. B-126,144; Texas Metal Works v. O. L. Gear Company; In the 60th Judicial District Court of Jefferson County, Texas. Mr. Yeates served as co-counsel in a case whereby the Defendant sold and serviced a faulty industrial steam hammer. Jury verdict for the Plaintiff, including an award of punitive damages.

Cause No. H-85-4884; Jim Arnold Corporation v. Al Monsoori; In the United States District Court for the Southern District of Texas. Mr. Yeates served as co-counsel on a case involving breach of contract and fraud. The Plaintiff leased oil field equipment to the Defendant. Jury verdict for the Plaintiff, including an award of punitive damages.

Cause No. B- 149,309; Steven McKnight, et al v. Park Central Nursing Home, et al; In the 60th Judicial District Court of Jefferson County, Texas. Mr. Yeates was local counsel on a wrongful death of a nursing home resident. Jury verdict for the Plaintiff, including an award of punitive damages.

Cause No. D-157,637, Roy Solomon v. Mission Petroleum; In the 136th Judicial District Court of Jefferson County, Texas. The Plaintiff was fired for allegedly failing a drug screen. The Plaintiff was employed as a commercial truck driver. Jury verdict for the Plaintiff, including an award of punitive damages.

Committed to your rights

Tommy is dedicated to workers’ rights and getting you the compensation you may be entitled if you’ve been injured in an accident.